A man leads two young boys into Friday prayers as Muslim worshippers arrive for prayer following the mosque attacks in New Zealand at the Islamic Center of Washington in Washington. 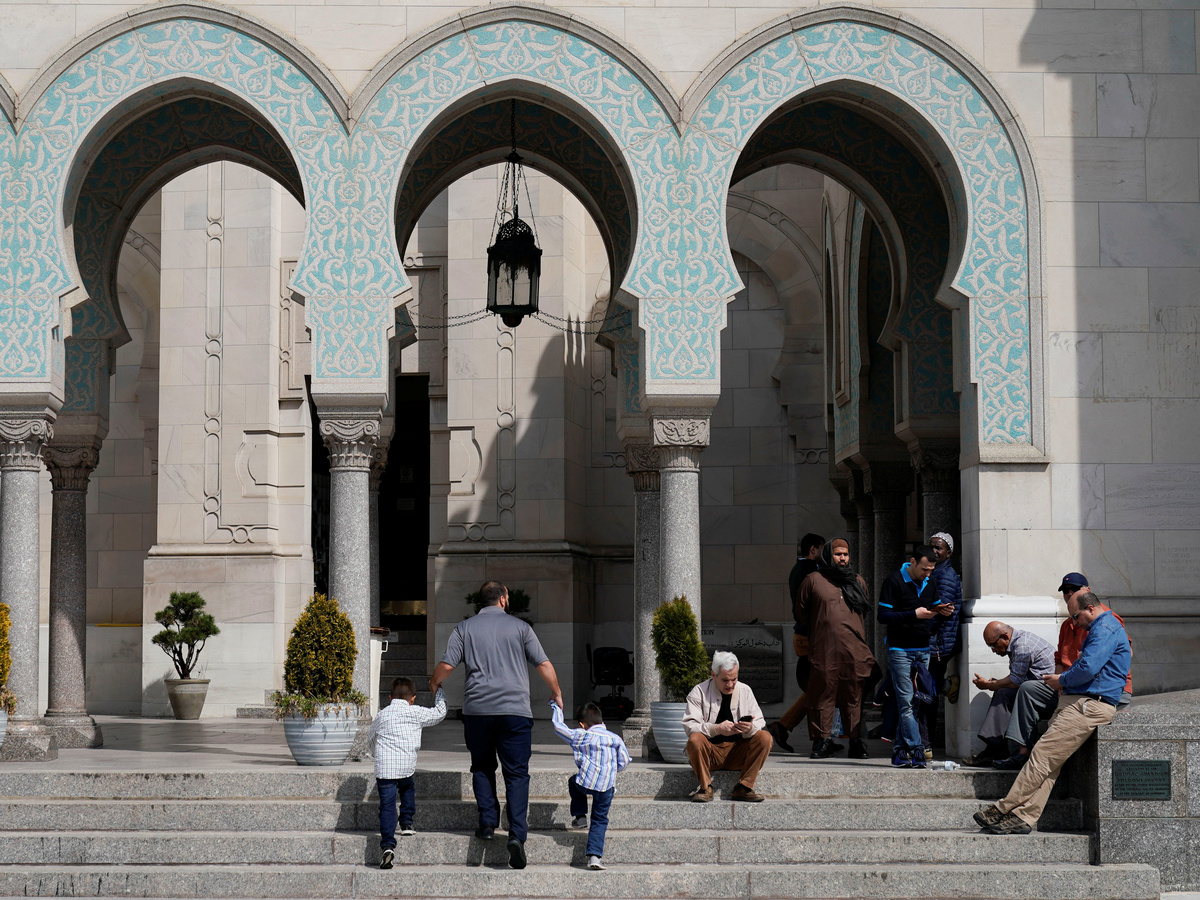 A man leads two young boys into Friday prayers as Muslim worshippers arrive for prayer following the mosque attacks in New Zealand at the Islamic Center of Washington in Washington.

As New Zealand grapples with the aftermath of the attack on two Muslim congregations in Christchurch, the mass shootings on the other side of the world have struck fear through Muslim-American communities and renewed calls for action against the rise of bigotry in the U.S.

Muslim-Americans urged political leaders, local officials and tech companies to confront the alarming spread of hate and racism that in recent years has led to scores of worshippers being slaughtered in religious institutions.

“Your words matter. Your policies matter … You should condemn this not only as a hate crime, but as a white supremacist terrorist attack … You need to condemn this community today.” pic.twitter.com/xp6WjAbGs7

“You should condemn this not only as a hate crime, but as a white supremacist terrorist attack,” Awad said.

“You need to assure all of us — Muslims, blacks, Jews, immigrants — that we are protected and you will not tolerate any physical violence against us because we are immigrants or we are minorities. You need to condemn this clearly today and you do not need to be vague. You have to be very clear on this.”

The alleged shooter, who is now in custody along with two others, live-streamed the massacre over Facebook. In the end, at least 49 people were killed and another 48 are being treated in hospitals.

You need to condemn this clearly today and you do not need to be vague. You have to be very clear on this.

In writings outlining his beliefs, the Australian man described himself as a 28-year-old claiming to represent Europeans and whites in a battle against immigrants — people he repeatedly called “invaders.” Throughout the screed, which he posted to several sources online, he cited his hatred for Islam and referred to the U.S. Constitution’s Second Amendment, arguing that attempts by the government to take away guns will lead to civil war.

Awad of CAIR alluded to President Trump’s proclivity for hyper-nationalist and xenophobic rhetoric on the campaign trail and as president and placed some of the blame for the ambush in New Zealand, at his feet.

“During your presidency and during your election campaign, Islamophobia took a sharp rise and attacks on innocent Muslims, innocent immigrants and mosques have skyrocketed,” Awad said. “We hold you responsible for this growing anti-Muslim sentiment in the country and in Europe, but also we do not excuse those terrorist attackers against minorities at home and abroad.”

Similarly, Muslim Advocates, a national civil rights group, urged Trump to disavow the attackers and the white nationalist movement in general, which they say invoke the president as an inspiration and a symbol of the white identity movement.

“In the wake of this heartbreaking, anti-Muslim mass slaughter, it is clear that more needs to be done to protect Muslims and all vulnerable communities from the very real dangers posed by hate and white nationalists. … It is time for President Trump, elected officials, law enforcement and tech companies to act,” Farhana Khera, the group’s executive director, said in a statement.

Khera noted Trump’s 2017 comments following the deadly Unite the Right rally in Charlottesville, Va., in which the president referred to neo-Nazi and white nationalist protesters as “very fine people.”

“This hate-filled murderer,” she said, referring to the Christchurch shooter, “drew inspiration from Trump, and the white nationalist movement has celebrated Trump’s words and policies.”

With hate crimes motivated by anti-Muslim bigotry rising to historic levels in recent years in the U.S., Khera said the FBI must “prioritize the prevention, detection, investigation and prosecution of right-wing, white nationalist violence — the most significant threat to public safety in our nation today.”

Additionally, social media platforms and tech companies like Facebook, Twitter and Google, which hate groups use to disseminate vile messages of prejudice and violence, and build their membership, need to do more to detect and shut down online objectionable content, Khera said.

Facebook moved quickly to take down the horrific video capturing the bloodshed in real time, as well as the alleged shooter’s Facebook and Instagram accounts. But by the time it did so, there was little the company could do to stop internet users from re-uploading the video to YouTube, Twitter, Reddit and other online platforms.

“The New Zealand shooter was able to livestream a 17-minute video of his murderous rampage that continues to spread like wildfire online. This is flatly unacceptable. Tech companies must take all steps possible to prevent something like this from happening again,” Khera said.

Rabbi Elliot Cosgrove of the Park Avenue Synagogue in New York City bought a massive bouquet of white flowers to the Islamic Cultural Center in Manhattan after the mass shootings at two New Zealand mosques. 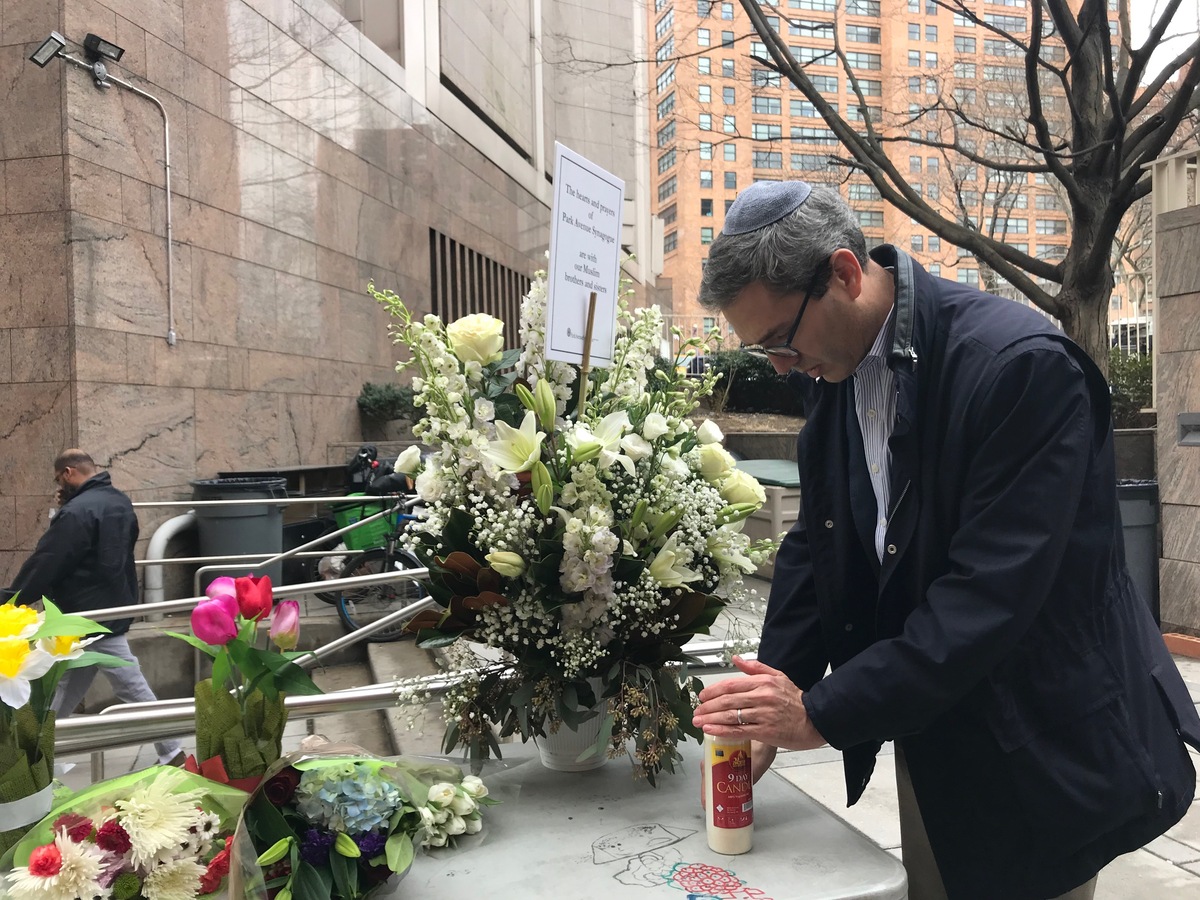 Rabbi Elliot Cosgrove of the Park Avenue Synagogue in New York City bought a massive bouquet of white flowers to the Islamic Cultural Center in Manhattan after the mass shootings at two New Zealand mosques.

“The rapid and wide-scale dissemination of this hateful content — live-streamed on Facebook, uploaded on YouTube and amplified on Reddit — shows how easily the largest platforms can still be misused,” Warner told The Washington Post. “It is ever clearer that YouTube, in particular, has yet to grapple with the role it has played in facilitating radicalization and recruitment.”

Twitter and Youtube have both condemned the attacks and said they are working to bring down any video of the shooting.

“I think it’s a small group of people that have very, very serious problems, I guess. If you look what happened in New Zealand, perhaps that’s the case. I don’t know enough about it yet…But it’s certainly a terrible thing,” he said.

He made the remarks shortly after signing the first veto of his presidency — a move that allows him to declare a national emergency along the southern border and pump billions of dollars into the construction of a wall, which he has said is being overrun by criminals seeking to harm Americans.

“People hate the word invasion, but that’s what it is,” Trump said Friday.

Muslims, who gathered for Friday prayers at mosques around the country, were unified in their grief over the tragedy and their refusal to be intimidated.

In New York City, the Islamic Cultural Center opened its door wide, and spread prayer mats in the courtyard for an overflow crowd.

Reem Elsobky, a doctor visiting from Toronto, told NPR she felt it was important to attend prayers at the mosque after learning about the carnage in New Zealand “because we’re not going to be afraid to come to our prayer places.”

“Everyone should feel safe when they pray,” she said.

Elsobky recalled a similar attack in Canada in 2017, when a gunman opened fire at a mosque in Quebec City. The memory still haunts her. “Unfortunately, every time I go to the mosque in Canada in downtown Toronto, I think about it.”

“Do I bring my kids or not?” she often wonders. But in the end, she said people should not be deterred by the possibility of violence. “You can’t live your life in fear.”

Burjan Ugural, a New York City taxi driver, said the shooters in New Zealand should be considered terrorists. “Terror has no nationality. Terror has no religion. Nobody can say this is ‘Islamic terror,’ this is Catholic terror.’ Terror is terror.”

Faith leaders of other religions stopped by the mosque to offer their condolences.

Rabbi Elliot Cosgrove of the nearby Park Avenue Synagogue bought a massive bouquet of white flowers. He said his congregation hasn’t forgotten at the mass shooting at a synagogue in Pittsburgh last year.

“The Jewish community knows, with the Pittsburgh shooting, what it means to have the promise of synagogue ripped out from under you,” Cosgrove said. 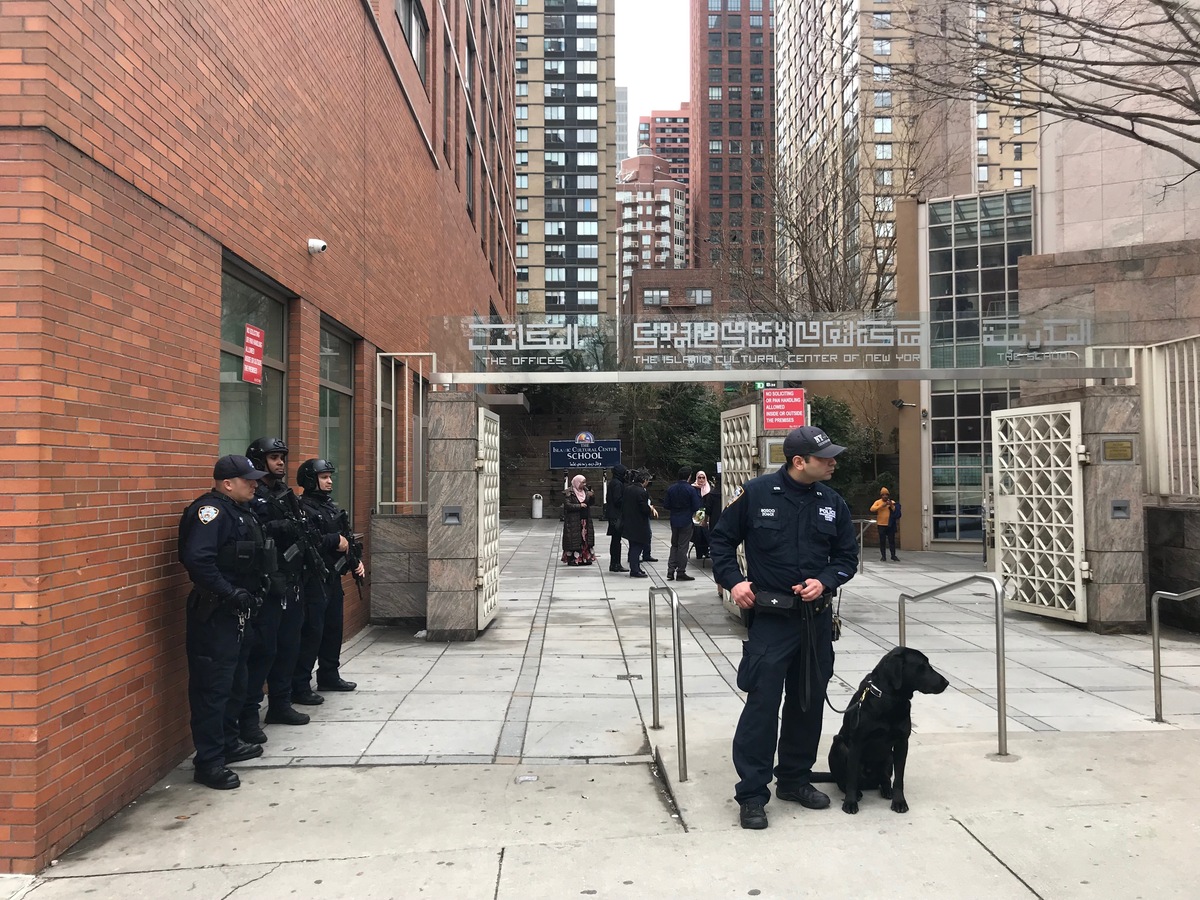 In Washington, D.C., Areeba Khan, an intern for Democratic Sen. Chris Coons of Delaware, attended the Friday prayer services offered at the Capitol.

“It’s a blessed day and to find out that that occurred, it really impacted me personally … it made me feel really scared in the moment,” Khan told NPR, adding that she found it comforting to be surrounded by members of the Muslim community.

Emad Alsagheer, a federal contractor for the Federal Trade Commission, said he first learned of the shooting when his friend texted him the livestream video of the attacker. As an immigrant from Syria, he didn’t expect events like the New Zealand attack to happen outside of war zones.

“I do not expect these things to actually happen in a peaceful community where the people are not in a war, or in a war zone,” Alsagheer said. “I actually left [Syria] because it was being bombed … I’ve been in very bad situations, I witnessed a lot of horrible things, but this was really a shock to me because I wasn’t prepared to see [the video].”

Although Homeland Security Secretary Kirstjen Nielsen said there are no “current, credible” threats against Muslim communities in the U.S., officials tightened security at mosques around the country.

“To the Muslim community here in new York: we stand with you always, and we will remain vigilant in keeping you safe — and making sure you feel safe too,” Police Commissioner James O’Neill said in a statement.