Tyler Holland guides his bike through the water as winds from Tropical Storm Barry push water from Lake Pontchartrain over the seawall Saturday. 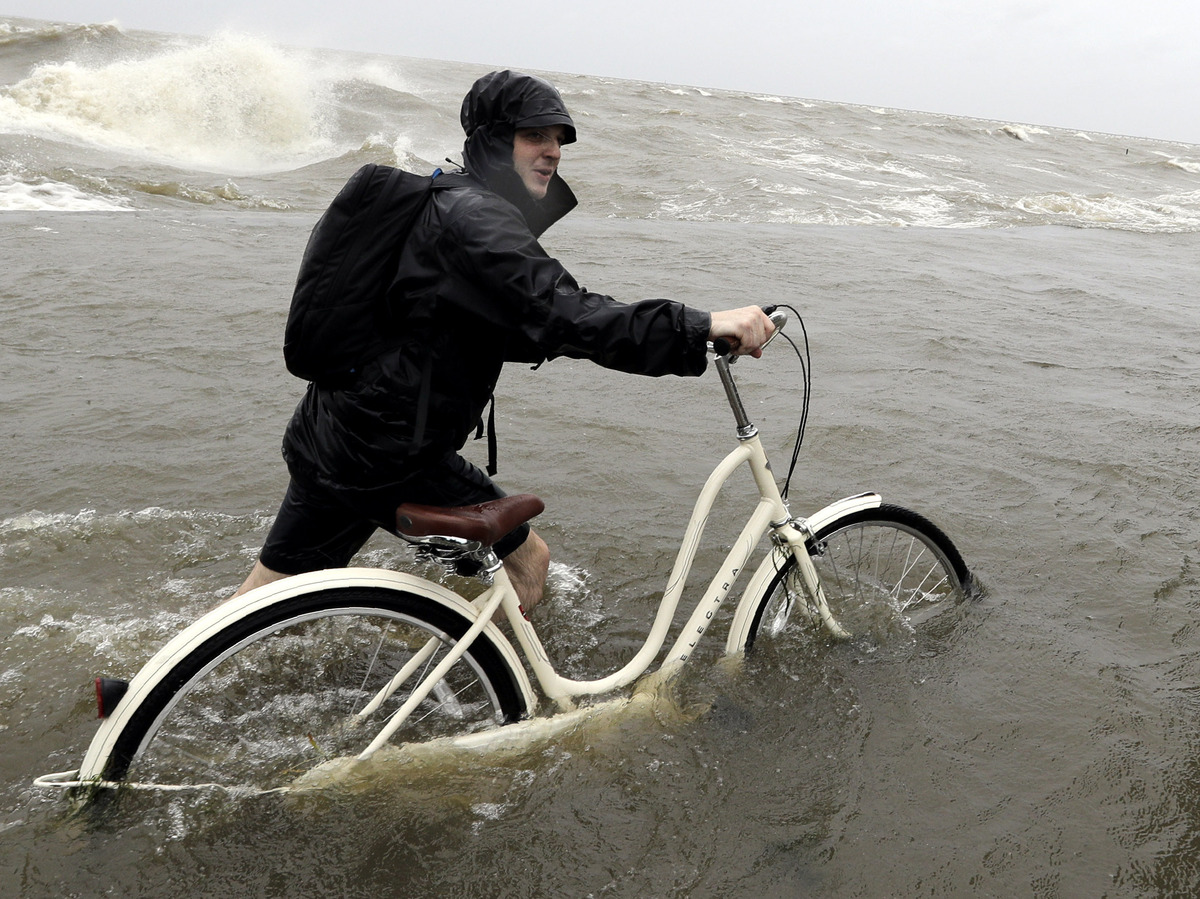 Tyler Holland guides his bike through the water as winds from Tropical Storm Barry push water from Lake Pontchartrain over the seawall Saturday.

A weakened Tropical Storm Barry continued to drench parts of Louisiana on Sunday as it creeped northward over the western part of the state, with officials warning of strong wind gusts and flooding as tens of thousands remained without power.

Although Barry was losing steam since it touched down on the Louisiana coast Saturday, the National Weather Service still warned of ongoing dangers posed by storm surges and the possibility of tornadoes in areas including parts of Louisiana and Mississippi.

“This storm still has a long way to go before it leaves the state,” Louisiana Gov. John Bel Edwards said. “We still have a significant amount of rain coming our way.”

Forecasters say rainfall estimates over south-central Louisiana now stand around 6 to 12 inches, with isolated maximum rainfall reaching as much as 20 inches, causing the potential for “dangerous, life-threatening flooding.”

Barry was briefly a Category 1 hurricane but the system weakened to a tropical storm. And on Sunday, maximum sustained winds were expected to remain around 45 mph, mostly near the coast.

The NWS expect Barry to weaken to a tropical depression later Sunday.

With the slow-moving system carrying such heavy downpours into the saturated ground and along rivers and streams already at high levels, Louisiana Gov. Edwards said now is not the time for residents to act like the they are out of the woods just yet.

“Some people may think that the threat is over. Some people may be tempted to think that because it was a Category 1 when it came ashore and has already been downgraded to a tropical storm, that it does not present a threat,” Edwards said. “That is not the case.”

As Barry moved inland, water was spilling over levees in Terrebonne and Plaquemines parishes, according to AccuWeather, which has been tracking the storm. Mandatory evacuations were ordered for all areas along Louisiana Highway 315.

Gov. Edwards said Saturday night that levees overtopping have been addressed and are no longer a concern.

More than 130,000 customers in Louisiana remained without power early Sunday, according to poweroutage.us. Many businesses remain closed, air travel experienced delays and conventions planned in the area have been cut short. The Coast Guard closed the Mississippi River to shipping traffic.

The storm is also impacting America’s energy industry. About 300 offshore oil and gas rigs and platforms have been evacuated, resulting in a 70% drop in oil production and the about a natural gas usually produced in the Gulf has been cut in half, according to Bureau of Safety and Environmental Enforcement.

As the storm moved north, officials at the Louis Armstrong New Orleans International Airport announced Sunday that most airlines are resuming normal operations. “If you have travel scheduled today, check with your airlines directly for the most accurate info. Arrive 2+ hours early as we may see long lines,” airport officials said.

Louisiana’s National Guard had some 3,000 soldiers deployed around the state. And Coast Guard helicopters have conducted rescues, as people on Saturday sought safety on rooftops and other high places as downpours pounded the area.