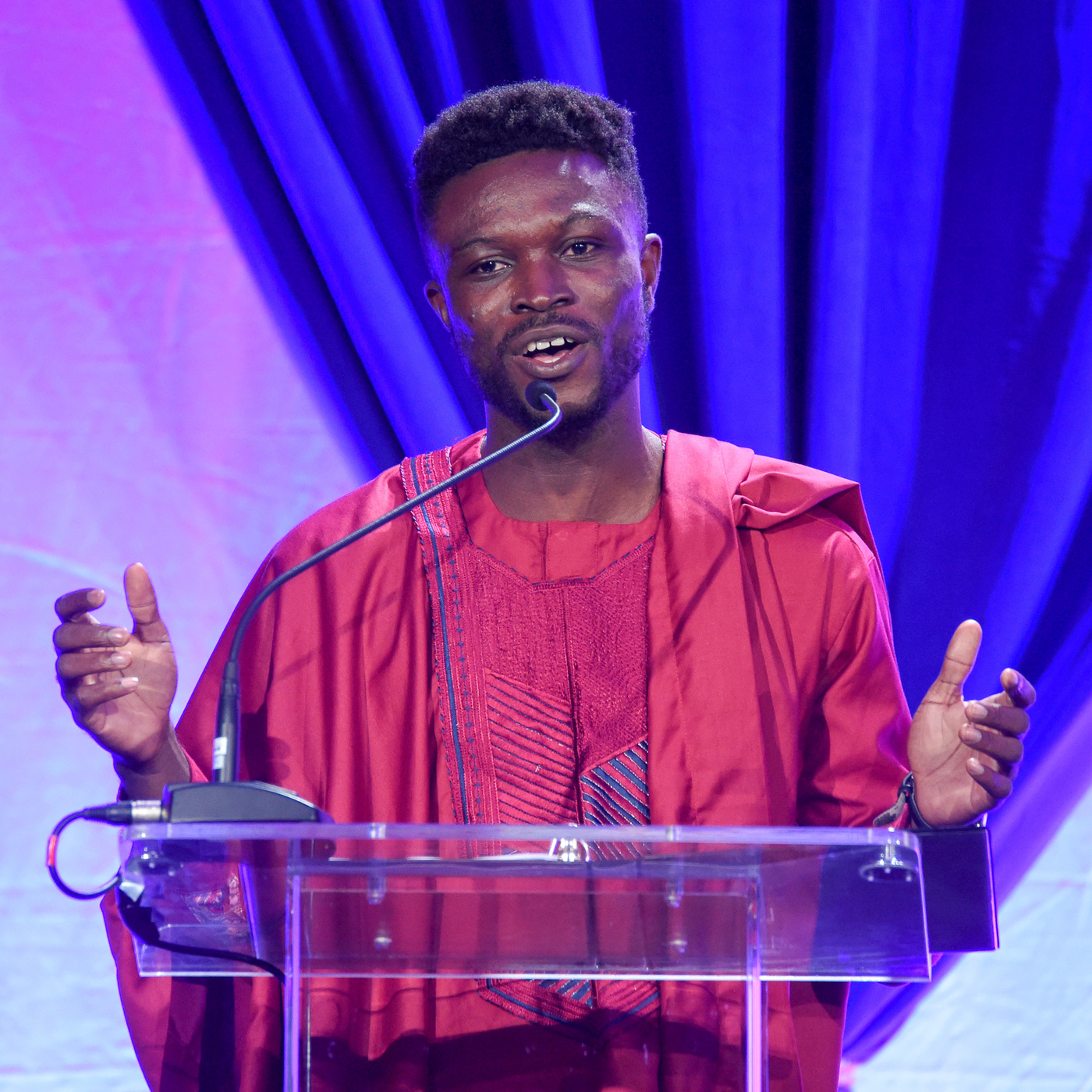 For Shadrack Frimpong, 28, finding himself a recipient of a 2019 Muhammad Ali Humanitarian Award “feels pretty crazy,” he says, “because here we have a kid who grew up in the middle of the forest in rural Ghana being compared to someone who really was the greatest of all time.”

He is one of six recipients of the annual award, given to advocates and activists for social change who are under 30. The awards were presented Sept. 12 in Louisville, Ky.

Frimpong was honored for his achievements as founder of Cocoa360, a nonprofit venture designed to directly finance clinics and schools in rural Ghana through revenues earned from communally-run village cocoa farms.

The first school opened in 2017 and now has about 150 students. The health clinic has treated about 3,500 patients, many for malaria, and has delivered approximately 70 babies.

In recognition of his work, Frimpong was also named as one of the Forbes 30 Under 30 Social Entrepreneurs, received the 2018 Queen’s Young Leaders Award and was listed among the Most Influential Young Ghanaians in 2018.

The late U.N. Secretary General Kofi Annan once called him the “embodiment of youth leadership.” The Ali Center was particularly impressed with his dedication – which it cites as one of Muhammad Ali’s six core principles.

That quality resonates for Frimpong, who remembers often thinking: “Can I do this, am I worthy of this? And each time I had to stay dedicated and committed and tell myself to keep going.”

Frimpong was raised in a mud hut with a bamboo frame, without electricity or running water, in the remote Ghana cocoa-farming village of Tarkwa Breman. His parents were cocoa farmers; his mother earned extra money needed to raise Shadrack and his five siblings by selling charcoal.

At the age of 9, he contracted a life-threatening infection. His parents used their family farm as collateral to borrow money to pay for travel to and treatment at a hospital that was five hours away.

His parents’ determination saved their son’s life — and also inspired him. He decided that his mission was to bring better health care and education to his village.

That is the course he has been on ever since. He won a scholarship to pursue his undergraduate degree and a master’s degree in nonprofit administration at the University of Pennsylvania, then returned to Ghana in 2015 to begin researching and developing his project, which officially began in 2017.

To gain additional expertise, he is now studying for a master of public health degree at Yale University, even as he oversees his project.

NPR spoke to Frimpong by phone. The conversation has been edited for clarity and for length.

Your childhood infection sounds scary. Was it a turning point in your life?

I had developed boils on both legs that spread all the way up my body. The doctor looked at my legs and said to my mother, no way is your son is going to keep these legs. The infections are moving deeper and deeper, and they will require amputation. But my mom begged him to see if a week’s worth of [antibiotic] treatment would work. I remember praying and saying if I can keep these legs, then I will use them and work to help other people.

Going into the sixth day the wounds started to heal.

Up until then I had never been introspective. I was only OK at school. When I was at the hospital, I thought, “If so many people went above and beyond to help me, I will do something. Whatever education I can pursue, I want to do that.” When I returned to school, I became obsessive about studying. I won a scholarship to attend one of the most competitive and best high schools in the country. To pay for living expenses and food, I also worked as a street hawker during school breaks, selling gum and handkerchiefs.

Subsequently, you won a scholarship to the University of Pennsylvania. What was your biggest surprise when you arrived in the United States?

The food. Back home we would eat chicken, rice, soup. At Penn, my friends would say let’s go check out a restaurant, and they would order a lot of leaves — what my friends called salad. That was a big adjustment initially.

My mouth would also be wide open looking at the beautiful roads, the tall buildings, the skyscrapers.

Which class made the biggest impact on you?

The biology of food with professor Scott Poethig. In a session about cocoa production, I learned for the first time that Ghana is the second leading cocoa exporter in the world, and the country has about $2 billion yearly in export revenue. In that moment I was so angry and frustrated. I thought: My parents and our families’ hard work had contributed so much to the Ghanaian economy, so why are we so poor? Why can’t farmers have quality education and health care?

I asked my professor, What if cocoa farmers stopped working, what would happen to Ghana’s economy? He said, it would collapse. I remember going to the washroom and crying. And after class my professor saw what I was going through and said, “You may have just found your life’s calling.”

Was that when you got the idea for Cocoa360?

The goal was to directly connect a farmer’s hard work to the impact that he or she can feel from it. I knew from growing up in the village and working on the farm that my father and my mother woke up every day thinking, how can our family have quality education and health care? I wanted to figure out how that could happen.

What were your next steps?

My professor encouraged me to apply for the university’s President’s Engagement Prize. I was one of five seniors to win, and I used the $150,000 prize as seed money. I had four Ghanaian roommates at the time and — this moves me to this day — they had offers of other jobs but they were so inspired by this project that they put their lives on hold for a year to help. And we all went to Ghana together.

What challenges did you face?

Even though I am from the village, because I had been away for a time I felt a bit foreign to the villagers at first. We had to do a lot of work to get the community to buy into the idea. We sat with the community and said, we have these funds and this opportunity, what can we do? We came up with the “farm for impact” model.

How does your model work?

The model is really simple. We have about 60 acres of land total from the community, which includes our current campus [with a health clinic and school], 10 acres with matured/harvest-ready cocoa crops and a whole other part that is yet to be cultivated.

So these farmers have their own farms to earn their livelihood but they’re also part of the community farm?

[The villagers] provide volunteer labor for the community farm and in return get these benefits, tuition-free education, subsidized health care. There is a Village Committee, nominated by the community. They are accountable to the community for the revenues, profits and expenses.

The more revenue we have from the farm, the more money we are able to plow back into the education and the health facilities.

Currently we have about 50 paid staff members for the entire organization — that includes the school, the clinic, the farm. We’ve grown so much that we even have a development office in Ghana, in Accra.

I’ve read that only girls are enrolled in the school?

We see the school as an opportunity for health and disease prevention, and we realize young girls are vulnerable. We also wanted to send a strong message that there is no tuition and so there is no excuse about not sending the girls to school.

Can your farm-for-impact model work elsewhere?

We know that what we are trying to do is nearly impossible, but we’ve been able to overcome the most difficult obstacle — of getting community buy-in. We see people in the community working and participating. Over three years now no one ever asked for money, they are interested in the education and the health care. That is why they are part of the project.

We know that NGOs have to perpetually keep raising funds. What happens is that the communities become passive recipients rather than active participants, as we have done in our model. Once we show self-sustainability, then we can go and expand and do this elsewhere, in Ghana and anywhere in the world that grows cash crops. The potential is huge.